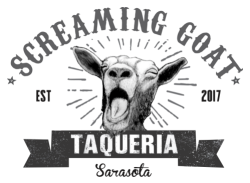 Aguas Frescas:  Literally translated “Cool Waters.”  These are refreshing beverages that are made from fresh seasonal fruit, but can also be made with flowers like our Hibiscus-Ginger (Flor de Jamaica) or grains like rice (horchata).  Selections with change with seasonally available fruit. At The Screaming Goat, we try to add our own “gourmet” spin to them by adding another dimension of flavor.

Arepa:  Very common street-food from Venezuela and Columbia.  Arepas are fried cakes made out of a cooked cornmeal (P.A.N.)  Our cakes are approximately 5 ½” in diameter and about a ½ inch thick.  We fry them, and then build your bowl on top of them.

Arugula:  A type of lettuce from the Brassicaceae family with a peppery, slightly bitter taste.

Barbacoa:  At The Screaming Goat, it refers to beef that has been seasoned with garlic, chipotle, adobo, vinegar, lime juice, cumin, Mexican oregano, cloves and black pepper, allowed to marinate and slowly cooked in the oven until it falls apart.  Traditionally, barbacoa is typically cooked in the ground. It is where we get our English term “Barbecue”

Cactus Leaves / “Nopales”:  Literally the leaves of the cactus...needles removed!

Chimichurri:  Very traditional condiment from Argentina which pairs very well with meat due to its acidity.  Traditionally the base is parsley and oregano, however the base of ours is made of cilantro and seasoned with onion, garlic, vinegar, cumin coriander and crushed red pepper.

Chipotle / Chipotle Puree: Chipotle Peppers are Jalapenos that have been allowed to ripen, and then are smoked.  The smoking process matures the oils in the peppers, making them a lot hotter than a fresh jalapeno.  There are two ways to buy chipotle peppers: dry, or in cans marinated in adobo sauce (a mixture of tomatoes, oil, salt, onions, garlic and spices).  We use canned chipotles, and puree them to make our chipotle puree.

Chorizo:  There are two distinctive kinds of Chorizo...The Spanish Style is a hard sausage, much like the texture of a salami, and Mexican style, which is what we feature at The Screaming Goat. Traditionally chorizo is made from pork, but ours is made from extra firm tofu and seasoned with garlic, ancho chili powder, smoked paprika, cumin, Mexican oregano, coriander, black pepper, achiote powder, cloves, cinnamon and apple cider vinegar.  Our chorizo is vegan.

Cochinita Pibil:  Cochinita Pibil is a dish that is centuries old that comes from the Yucatan Peninsula of Mexico.  It is pork shoulder (or butt) that has been marinated in sour citrus juice and seasoned with achiote, garlic, onion, Mexican oregano, cumin, cinnamon, cloves, allspice and black pepper.  It is wrapped in banana leaves and slow-roasted until it falls apart. The achiote gives it the distinctive red color. Traditionally it is cooked in the ground. In Spanish Cochinita means “baby pig.”  Pibil is believed to be a Mayan verb meaning “to roast.”

Corn Tortillas:  Made daily by a local tortillaria.  Made of corn, water and salt. Completely gluten free.

Crema:  The Latin version of French Creme Fraiche.  It is lighter than sour cream. Ours is made from cream and buttermilk from Dakin Dairy Farms in Mayaka City, and flavored with fresh lime and orange juice.

Guacamole:  Mash made from Hass avocados (grown in California and Mexico with a higher fat content) with the addition of tomatoes, red onion, orange juice, lime juice, kosher salt and black pepper.

Lentil:  Type of legume like beans.  They are round in shape, and look very similar to a split pea.

Masa: Type of cornmeal traditionally used to make corn tortillas, tamales, pupusas as well as a myriad of other Latin dishes.  The corn goes through a process of nixtamalization making it unique to American-style cornmeal.

Paleta:  “Small Stick” in Spanish...they are a Latin “popsicle.”  They are typically made out of fresh fruit, or fresh fruit with dairy added.  Ours are made by a company here in Sarasota, Pop Craft.

Pepper, Chipotle:  A jalapeno that has been allowed to ripen, been dried and smoked.  Can be bought either dried, or canned packed in adobo sauce.

Pepper, Guajillo: The dried version of the Mirasol chili.  Mild heat with a complex fruity flavor

Pico de Gallo:  Literally translated “Beak of the Rooster,” for the way it is eaten by pinching it between your fingers to pick it up.  A relish, or salsa made of tomatoes, onions, jalapenos, lime juice and cilantro.

Quinoa:  Very ancient grain from high in the Andes mountains of Peru and Bolivia.  It is a complete protein, meaning that is has all of the amino acids that eating a piece of meat would provide.

Refried Black Beans:  Our refried black beans are vegan, meaning that there isn’t any animal, or animal by-product used to make them.  They are cooked in our home made vegetable stock with spices and aromatic vegetables. After they are cooked, they are roughly mashed to give a silky texture, while still maintaining some whole beans.

Tomatillo:  Often referred to as Mexican Green Tomatoes.  Although they resemble a small green tomato, they are actually closely related to the cape gooseberry.  They have a tart flavor, and can be used either fresh, or cooked. We use them in several of our salsas.

Vegan vs. Vegetarian:  There are many levels of vegetarians...some eat fish, but not meat, others eat only vegetables.  Vegans only eat vegetables, and no animal by-products like dairy, honey or even imitation vanilla.